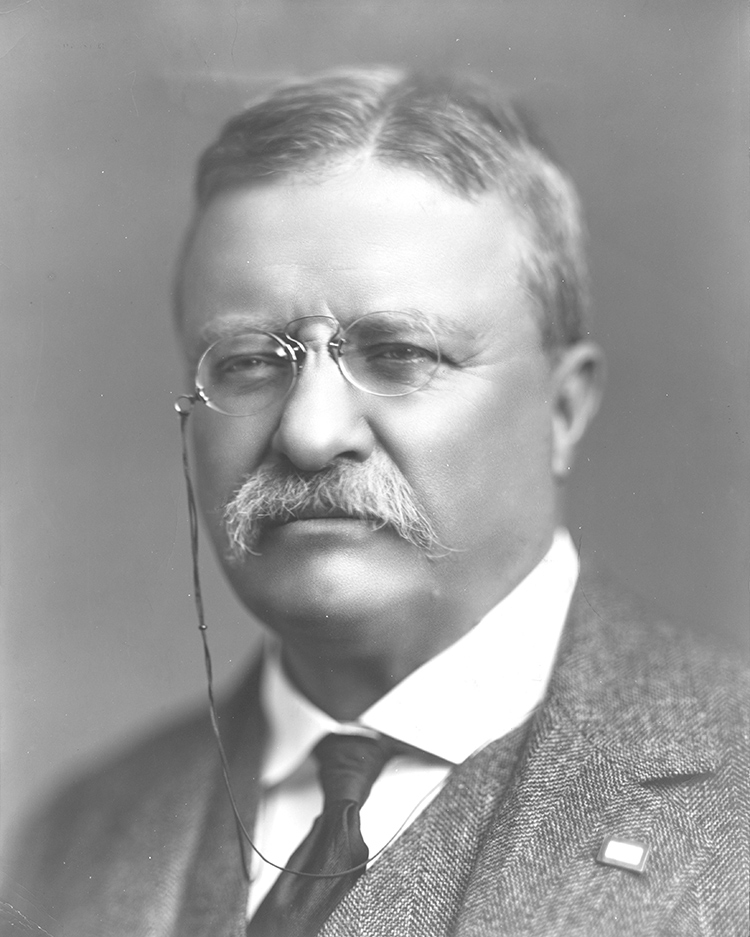 Theodore Roosevelt, 26th president of the United States, was born in New York City on Ocober 27, 1858. He graduated from Harvard College in June 1880 and married in October.

In September 1883, he traveled to the Badlands to hunt buffalo and other wild game. While there, he decided to purchase the Maltese Cross Ranch and cattle. He hired Sylvane Ferris and William Merrifield to operate the ranch. In the spring, Roosevelt returned to the Badlands and established a second ranch, the Elkhorn, on the Little Missouri River about 35 miles north of Medora. The outdoors and ranch life restored Roosevelt’s poor health.
By August 1884, he had 1,600 head of cattle. Roosevelt helped form the Little Missouri Stockmen’s Association to prevent livestock rustling, serving as chairman in 1884 and 1885 and president in 1886. In the fall of 1886, he returned to New York, married Edith Carow in England and continued in politics. After the winter of 1886-1887 destroyed two-thirds of his cattle, he returned to North Dakota several times over the years trying to recoup his losses.

He abandoned the Elkhorn Ranch by 1892 and shifted his activities to the Maltese Cross, where he and three partners formed the Elkhorn Ranch Company. Ferris became manager of the new organization and began purchasing more cattle. However, by 1897, Roosevelt decided to sell out and in 1899 sold his remaining cattle to Ferris. By the turn of the century, the region was opened to homesteaders marking the end of the open range.
Roosevelt continued in government and served in the Spanish American War as leader of the famous Rough Riders. Returning home a war hero, he was elected Governor of New York in 1898 and in 1900 was elected vice-president of the United States.

Roosevelt became president after William McKinley’s assassination on September 14, 1901, and was elected in his own right in 1904. He visited Medora only two more times after 1898–in March 1903 and again in 1911.