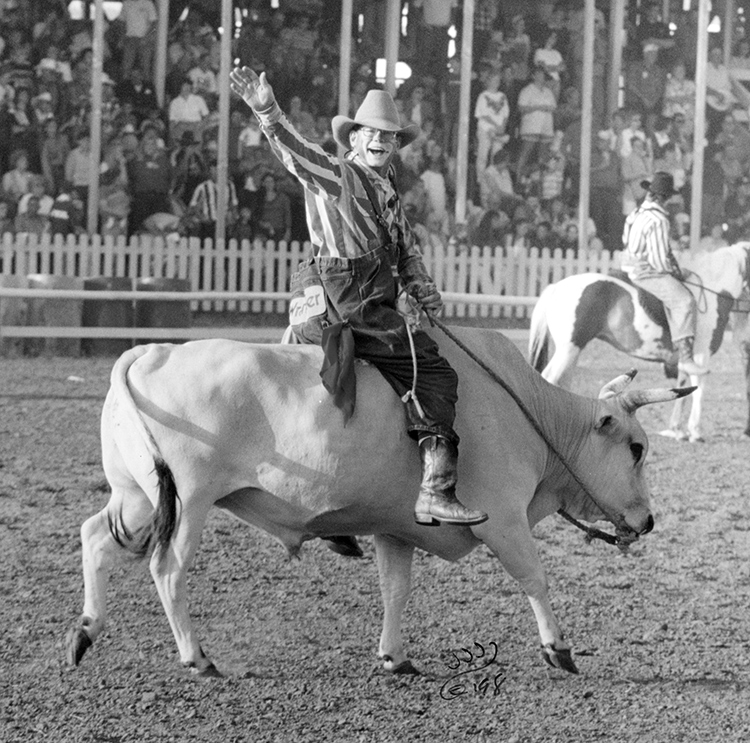 Steve Tomac was born in Hettinger in 1953, the 2nd oldest in a family of 18 kids. His rodeo career started at a young age at the Black Horse Arena near Meadow, South Dakota. When the clown got laughs from the crowd, Steve thought that looked easy and he’d like to do that. When he got into high school, Steve worked with a neighbor, Bob Baumeister, who was a horse trainer.

Tomac got his start on July 4, 1971, where he pitched in at a Raleigh rodeo when the clown couldn’t make it, and the rest is history. He also worked as a bullfighter from 1971 1980 and a barrel man and contract specialty act from 1975 2004. In the summer of 1973, Steve clowned for the Figure Four rodeos.

By 1976, he had appeared in every NDRA rodeo and some in Montana, Wyoming and South Dakota. In the late 1970s, he expanded to Nebraska, Minnesota and Canada. From 1983 2001, he worked 40 50 PRCA performances each year, covering a range of 7 states. One of his favorite locations was the old Mandan Rodeo arena, with its energy and protection.

Elected in 1986, Tomac served stints in both houses of the State Legislature until 2003. He is a life member of the PRCA and has been active on electric cooperative and water boards and on the Badlands Circuit Board from 1987 2004. He now ranches on an 1,100 acre spread near St. Anthony with his brother and works with Basin Electric Power Cooperative, Bismarck.