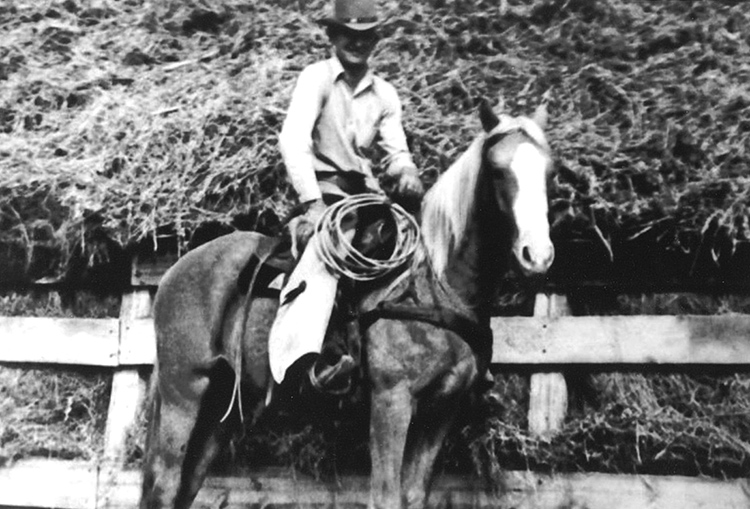 Stanley “Longhorn” Pope might’ve been born in 1931 in Bowman, but he lived the majority of his life on the TP Ranch, southwest of Amidon, in Slope County. His great-grandmother was Margaret Barr Roberts, the “First Lady of the Badlands”. His grandmother, Elizabeth, served for 30 years as a Deputy Game Warden in North Dakota, the first woman to do so. He and his bride, Joan Andrews, married in 1953 and ranched in Montana for a few years before returning to ND to raise a family and a herd of commercial Hereford cattle on the TP Ranch. For a short while, Longhorns also grazed those pastures.

As a young man, Stanley participated in local rodeos as a pick-up man and a calf roper. After he became airborne with a pilot’s license, he often flew cowboys to compete in tightly scheduled rodeos.

Stan was the quintessential community member, serving as a pilot for the Bowman and Slope County Fire Departments, as well as Chief for the Amidon Fire Department and President of the ND Fire Chief’s Association. He served on the Slope County Fair Board, belonged to the Bowman Area Chamber of Commerce and was a 4-H leader for more than a quarter century. He was a Little Missouri Grazing Association Director, an NDCHF Trustee and belonged to the Experimental Aircraft Association, the ND Stockmen’s Association and the ND Hereford Association. For 40 years he served on the Bowman County Airport Authority. Bowman FFA awarded him the Honorary Chapter Farmer Award in 1973 and in 1978 he was designated the NDSU Harvest Bowl Slope County Agriculturist Honoree. In 2001 he was named the Slope County Friend of 4-H and the Bowman Chamber Farmer/Rancher of the Year. He was the Deputy Sheriff of Slope County for 27 years.

On a lighter note, in 1992, his conceptual art piece, the Open Range, garnered attention from passersby with out of state plates and got Stanley some attention from the press. Stanley was doing what he loved, working cattle on the TP under the bright June sky, when a woofy cow charged and tossed him over the fence, tragically ending his life in 2013.