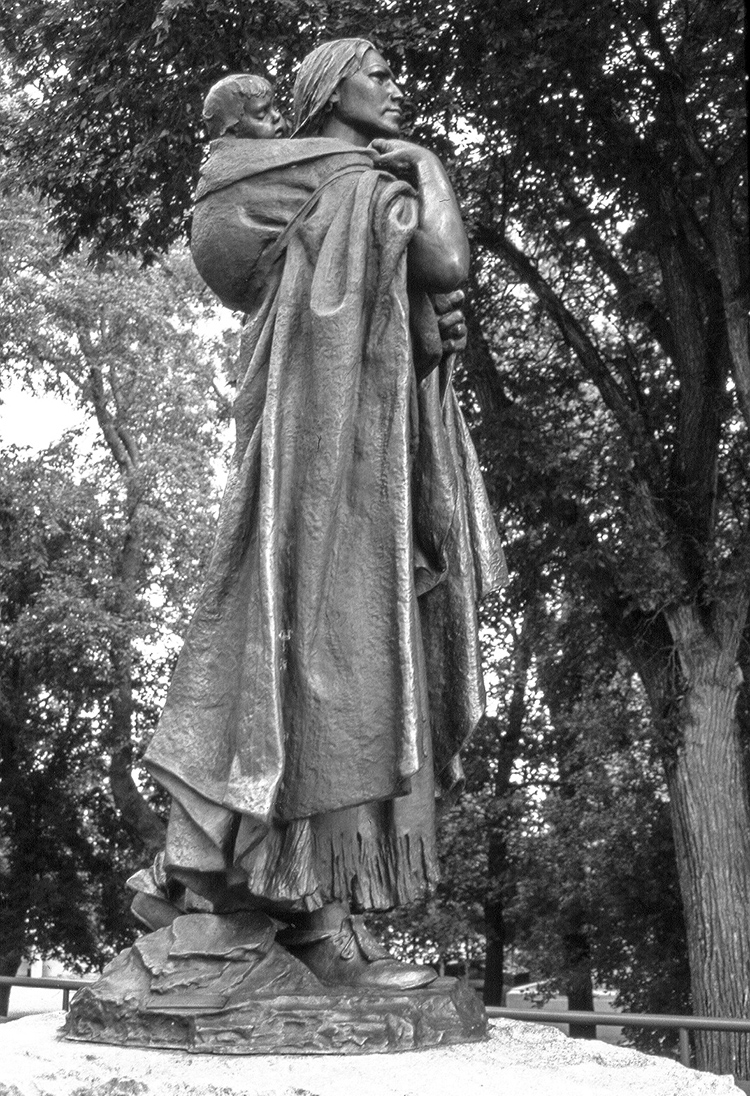 Sakakawea is one of America’s most famous people. Though she was the youngest adult member and the only woman on the Lewis and Clark Expedition, her great contributions to the Corps of Discovery’s grueling journey to the Pacific Coast and back have rendered her the most celebrated woman in American history. She served as guide, interpreter, food gatherer and care giver for the Corps of Discovery from Fort Mandan to the Pacific.

Captains Meriwether Lewis and William Clark embarked on their journey up the Missouri River in May 1804, arriving in the homeland of the Mandan and Hidatsa at the Knife River villages in late October 1804. They moved into the newly constructed Fort Mandan on November 20. During the winter of 1804-1805 at Fort Mandan, the captains met two French fur traders, Rene Jusseume and Touissant Charbonneau, who had been living among the Mandan and Hidatsa. Both were hired as interpreters.

When Charbonneau and his young wife, Sakakawea, moved into Fort Mandan in late November 1804, they were expecting their first child. On February 11, 1805, Sakakawea gave birth to a son, Jean Baptiste, at the fort. He was only 55 days old when the Corps left Fort Mandan with Lewis and Clark on April 7, 1805.

The Corps of Discovery traveled west, reaching Three Forks, where Sakakawea recognized the area where she had been kidnaped from the Shoshone Indians four years earlier. She was reunited with her people, including her brother, a Shoshone war chief, Cameahwait. On November 7, 1805, the Corps reached the Pacific Ocean and quickly prepared a fort for the winter, naming it Fort Clatsop. The Corps headed back east on March 23, 1806.
At Travelers Rest, Lewis and Clark divided into two groups with Sakakawea continuing on with Clark. She was the one who led the party through the Bozeman Pass, bringing them safely to the Yellowstone River. The two groups joined again on the Missouri River and Sakakawea saw them safely back to Fort Mandan and the Knife River villages. By then, Sakakawea had earned the respect of Lewis and Clark. Though she wasn’t paid any wages, her husband, Touissant Charbonneau, received $500 for their services.

There is continuing debate over when and where Sakakawea died and is buried, perhaps living to age 25 and dying at Fort Manuel Lisa (South Dakota) or dying as an old woman on the Wind River Reservation (Wyoming). Regardless, she made history and continues to be honored, most recently with the $1 gold coin and a statue in the nation’s Capital.