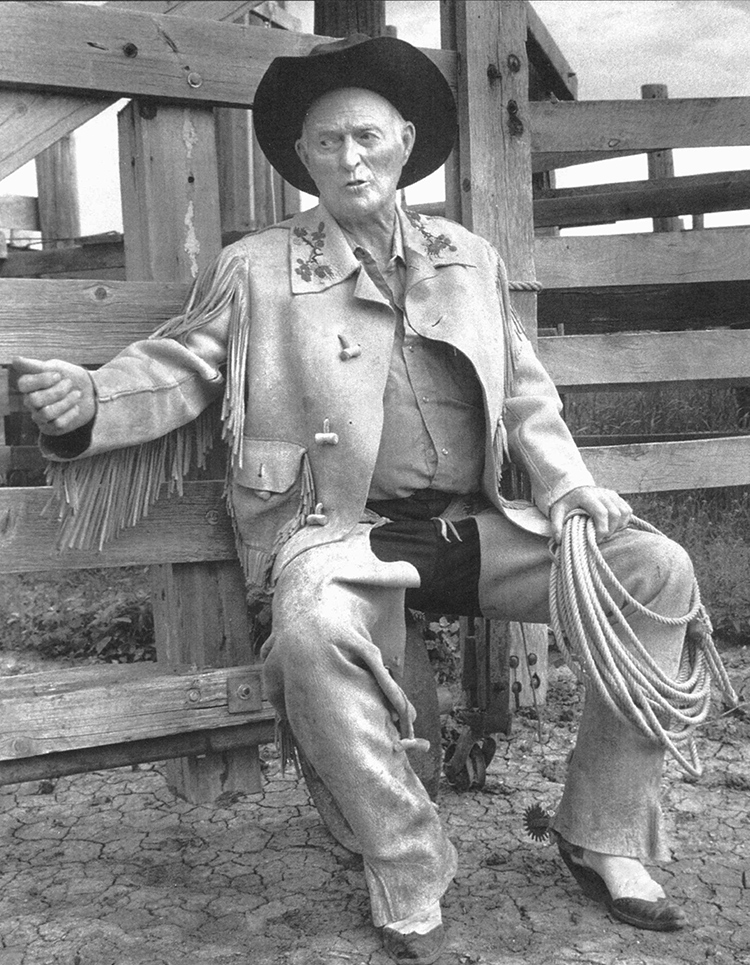 Robert Rindt was well known in North Dakota for his more than 40 years of teaching; performing rope, whip, trick shooting and tumbling acts; and producing rodeos and other entertainment shows. His wife, Doris, was his partner in many of those acts, and they were once featured in Life Magazine for a Minot State University performance.
Rindt was so good with a whip that he could cut a small piece of paper out of Doris’ mouth at 15 feet. His riding tricks included hanging from the side of a horse by only one stirrup. Not limited to trick acts, he also rode saddle broncs and Brahma bulls and bull-dogged steers.

Living near Drake, in McHenry County, Rindt was 17 years old when he began participating in rodeos. He rode his horse 40 miles to Towner to enter a rodeo—and rode back home with the $15 he won in the saddle-bronc riding event. For the next 50 years, he worked between 10 and 15 rodeos each year. He and Doris once performed a specialty act for President Truman at a Missouri rodeo.

Both he and Doris taught school in a number of locales from 1945-‘66. Although his classroom was 6th grade, he and Doris also taught band and music. Doris was hired to teach physical education and dancing, and Rindt taught leather craft before and after school.

While teaching at Fort Totten, he was affectionately called ‘Uncle Bob’. He was 66 years old and still roping, riding and cracking the whip. Duane Howard recalled meeting him at a late-1940s Indian Fall Fair in Fort Totten. Howard says Rindt had a trailer load of the best tack he had ever seen. Rindt hosted play days and ‘mount money rodeos’ where Howard, among others, learned the basics of bronc riding and steer wrestling. His influence and magnanimity were lifelong gifts to countless kids.

After his formal retirement from teaching, Rindt spent most of his time raising horses and Brahma cattle on his B.R. Ranch west of Sawyer. He produced his own ‘Wild West Shows’ there for several years, one to two per year from the 1970s through the early ‘90s. He also enjoyed sharing his expertise with 4-H members and Boy Scouts and loved entertaining and teaching.

Rindt was a teacher, rodeo cowboy and throwback to the wild and wooly days when “cowboys were cowboys”. He is fondly remembered by many for his contributions to North Dakota’s sport of rodeo showmanship. ‘Cowboy Bob’ died in 1997.