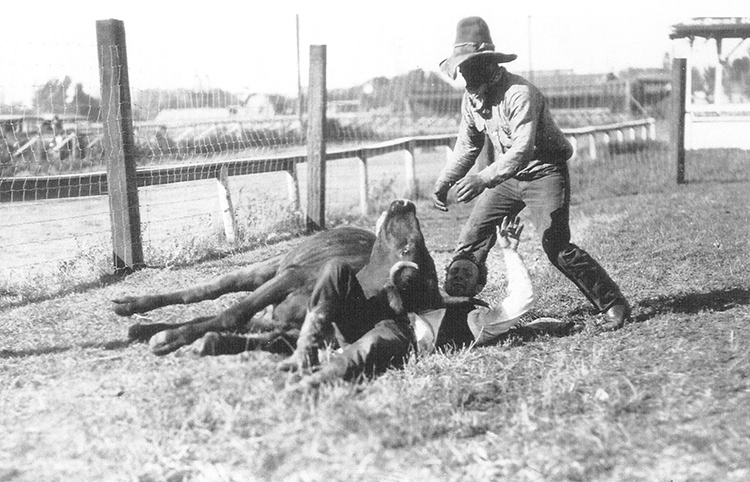 One of the Badlands’ most colorful cowboys, Bob McLeod was born April 1, 1902, in Dickey, North Dakota. Growing up on horseback, he was raised on a horse ranch on Franks Creek north of Medora where the family raised horses, which they sold to settlers for their transportation and farm work.

As a teenager, Bob began riding and breaking broncs. In 1914, he and his older brother sold horses to the French, English and U.S. governments for use in World War I. In the 1920s, over 300 horses roamed the ranch and pastures.

Bob worked with his father and family at the McLeod Ranch from 1908 until 1924 when he moved to a ranch east of Trotters. In 1924, he married Lenore Herr in Medora. That year, he furnished the bucking horses for the Killdeer Mountain Round up Rodeo at $3. The rodeo history says, “The McCloud [McLeod] bunch of twisters are notorious throughout this country.”

Bob participated in local and regional rodeos around Medora, Grassy Butte, Killdeer and Richardton. He won in the wild horse races and saddle riding events taking many first places. In 1925, Bob and Lenore spent the summer with George Gardner’s Rodeo Troupe staging shows in Slope and Billings counties and several other states.

Bob stopped participating in rodeos in 1931 after his daughter, June, was born. However, he often supplied livestock for and helped at local rodeos and trained saddle and team horses for other people.

Bob and Lenore moved to a ranch north of Medora in 1929, which they sold to the U.S. government in 1937 for the Little Missouri National Grasslands. In 1938, they moved to Chalk Buttes, southwest of Ekalaka, Montana, and then to the 22 Ranch six years later where he raised white faced Herefords and horses until 1940 and Charolais until 1966. Bob died on May 20, 1966, at Ekalaka.