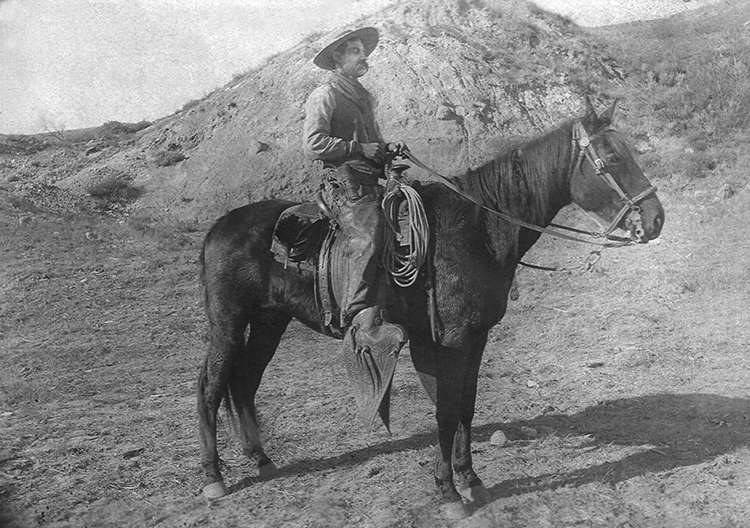 Perfecto Fernandez, a/k/a Georgie Baye, was born in Brownsville, Texas, on May 12, 1861. His first cattle drive was to Wyoming in 1875. After hooking up with John Goodall, he came along to Dakota Territory. According to folks at the Wibaux Museum, Fernandez helped Pierre Wibaux drive longhorns from Texas to Montana.

He worked as a horse wrangler for Wibaux and Gus Grissy at the W Bar Ranch. Fernandez was riding for the Little Missouri Livestock Association and took part in the massive round up with Teddy Roosevelt in 1884.

In 1885, he moved to the White Earth Valley and was the horse foreman and bronc buster for Jameson’s EJ Horse Ranch situated five miles north of Hall’s Trading Post. Fernandez made saddles, rawhide braided ropes, reins, bridles and horsehair saddle pads during the long winter months.

He took part in horse races and played polo at the EJ. On the 4th of July, he played stringed instruments and harmonica for celebrations at the Trading Post. The Marquis de Mores gifted Fernandez and Hall with matching Colt 45 caliber revolvers. They were guests at the Chateau de Mores on a number of occasions.
​
Fernandez made his way to Mandan when President Theodore Roosevelt came to N.D. in 1903. He hopped on the train and went on to Medora with Roosevelt. When Roosevelt became president, he orchestrated Fernandez’s citizenship, registering under the name Georgie Baye.

After the EJ Ranch was sold, Fernandez continued a horse operation with Ed Hall. They bred draft horses. En route to the Red River Valley to sell matched teams to harvest operations, they were able to perfectly train the pairs on the trail and could command prices anywhere from $800 to $1,200 per team.

The equipment and wagons were shipped by rail back to White Earth, and Hall and Fernandez would stop off in Minot to purchase supplies to tide them over the next winter. This business became less lucrative so they began trailing horses to Belle Fourche, S.D., to sell them to the U.S. Army.

Fernandez served as Grand Marshall at the 25th Anniversary of Sidney, Mont. His hat is displayed in the Wibaux Museum. He settled on Bennie Peer Creek in McKenzie County to raise sheep and horses. In the late 1890s, he married Margaret Smith in Sanger, N.D., and they had three sons.

Fernandez died in Aug. 1935 and was buried just north of the Cross Ranch near Sanger.