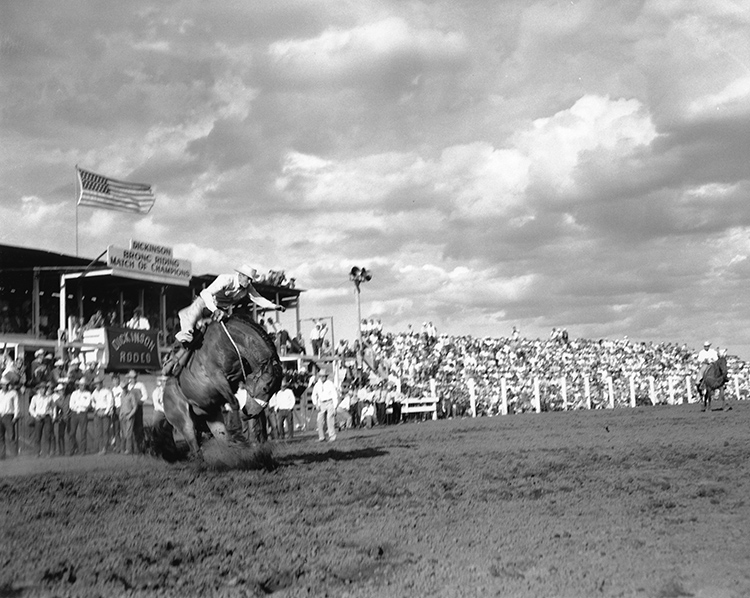 Old Fitzgerald #22 was owned by John Steen, a horse buyer from Linton, and had the distinction of bucking off top cowboys before they could make a qualified ride.

He was a Percheron-cross work horse that was discovered while working in the fields around Fort Yates in the late 1940s. Old Fitzgerald was first bucked at the Saturday Indian rodeos north of Fort Yates near Porcupine Creek, where he was called ‘Bobo Joe.’

The big, bay gelding stood about 15 1/2 hands tall, weighed around 1,500 pounds and was marked with a small dot on his forehead. He was amazingly gentle, except when dressed in a saddle and flank strap. He was a bucker that could send champions like Casey Tibbs and Dean Armstrong flying through the air.

After a cowboy was thrown, John would enter the arena, remove the saddle and flank strap and then motion for a child to come out into the arena to ride Old Fitzgerald, proving his gentle demeanor.

John had heard about Old Fitzgerald and liked what he heard so he bought him and took him to rodeos across North Dakota, including the Home on the Range Champions’ Ride Match and the Dickinson Match of Champions during the 1950s and 1960s.

Cowboys wanted to draw Old Fitzgerald, but only six or seven cowboys managed to make it to the whistle during the more than ten years that he bucked at rodeos. Casey Tibbs once offered to buy Old Fitzgerald, but John refused. He said, “No, this old guy will be retiring here in North Dakota. This is his home.” It is likely he was put out to pasture in the Cannonball area.