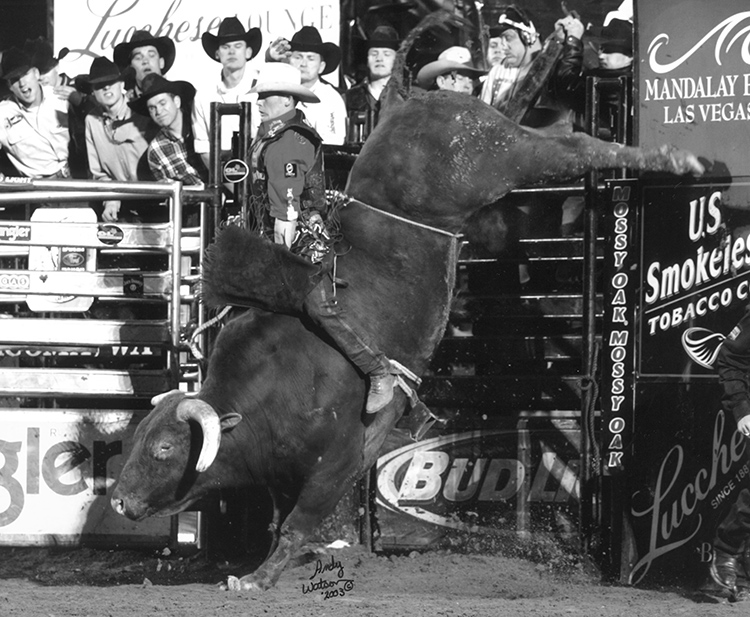 Often called the “most famous bull in the world,” Little Yellow Jacket #P761 was bred and raised by the Joe Berger family of Mandan. Later owned by Joe and Nevada Berger, Tom Teague and Bernie Taupin, this ferocious 1,600 pound bundle of bull has participated in major bull riding events all over the U.S.

He competed at the World Finals of the Professional Bull Riding organization in Las Vegas several times and was named PBR World Champion Bucking Bull in 2002, 2003 and 2004, the only bull in history to do so in three consecutive years.

PBR Livestock Superintendent and Vice president Cody Lambert described Little Yellow Jacket as “a once in a lifetime bull. He has the kind of heart, desire and athletic ability that true champions in any walk of life possess.”

At the end of 2004, Little Yellow Jacket had been ridden only 14 times in 90 attempts to an average score of 93 points. Once described as “a once in a lifetime bull,” he and 1997 PBR World Champion Michael Gaffney earned an outstanding score of 96.5 points in April 2004, tying the record shared by Chris Shivers and Bubba Dunn.   Little Yellow Jacket bucked off Shivers in the “Million Dollar Challenge” in Colorado Springs. That same year, he and Chris Shivers both won PBR world titles.
Little Yellow Jacket bucked in his home state for the last time in 2005. He is featured on highlight reels and, during his career, on major network and cable television stations. Sometimes referred to as the “Michael Jordan of professional bull riding,” he has his own merchandise line of clothing, stuffed animals, toy replicas, Christmas tree ornaments and more.

He ceremoniously retired in 2005 after an illustrious six year career in the PBR. He spends his retirement time as a sire on a North Dakota ranch. Not soon to be forgotten, he continues to live on in professional bull riding; however, through some of his offspring that are currently making their marks in the world of professional bull riding.