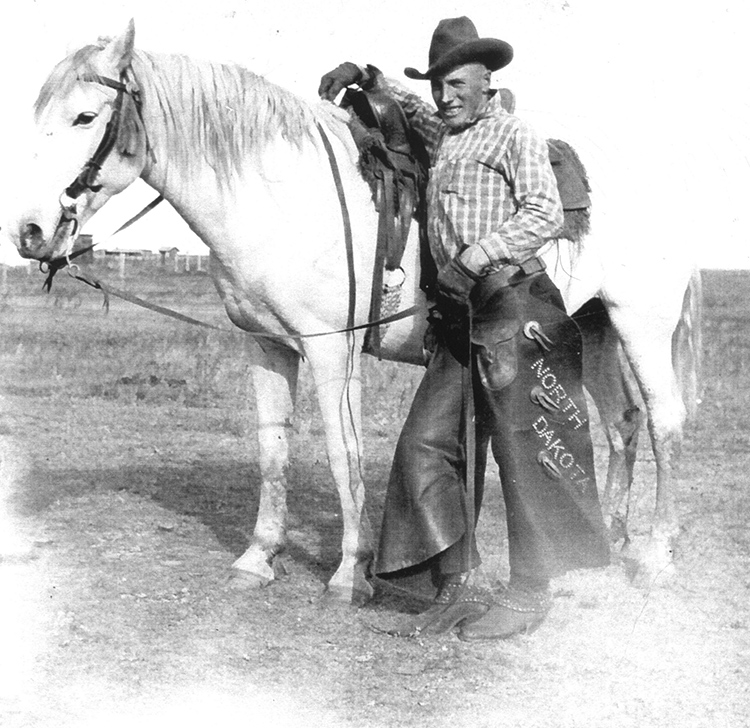 Born Oct. 31, 1903, near Dazey, North Dakota, Leslie ‘Jim’ Barnhart was one of North Dakota’s early rodeo producers. In 1913, he came with his parents to a homestead 7 miles east of Grassy Butte where he ranched with his father for 13 years.

During that time, Jim made a showing as an all-around good hand and became involved in the rodeo business. He started in the early 1930s with ‘wild horse round ups,’ where the ranchers around the Grassy Butte area would bring in their worst outlaws and the local cowboys would try to ride them.

They had no arena, but would put all the cars and wagons in a circle. The horses would be eared down, blind folded, saddled and mounted by a cowboy. When the horse was turned loose, the cowboy was pretty much on his own.

Jim was one of the first stock contractors to raise stock and lease it to other rodeo producers. Some of his best known bucking horses were Big Buck, No. 7, Old Paint and, of course, the famous Whiz Bang. Jim produced rodeos for nearly 30 years with plans to build one of the best bucking strings in the country.

He married Hattie Godfrey at Dickinson on Sept. 6, 1923. In 1942, they moved to Medora and, shortly after, Jim was elected Billings County sheriff, serving four terms. He also chaired the wild horse round ups and continued to produce rodeos until he died on June 5, 1961, in Dickinson.