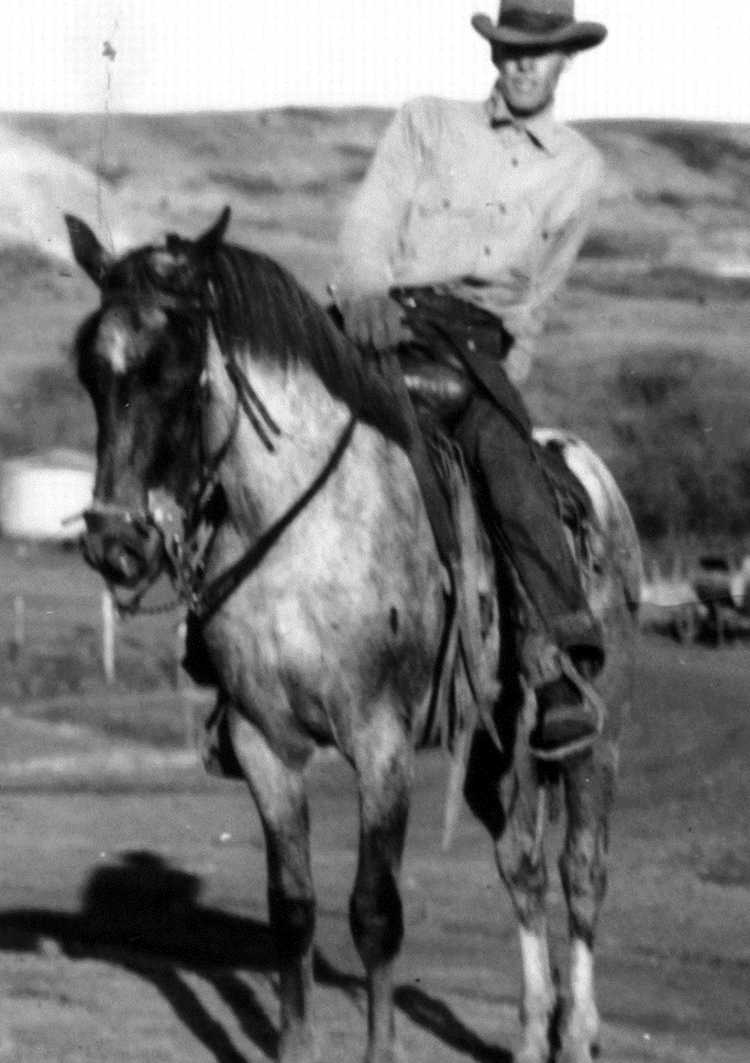 LeRoy “Bud” Perry was born in Drake, ND, on the Fourth of July, 1907. His parents moved to the Killdeer area where Perry graduated from the 8th grade. Perry’s life as a cowboy began one day when he was only 11 years old and riding down Killdeer’s Main Street. He was noticed by Bob Wilcox, who offered him a job on a beef round-up. He worked on several other ranches in the Area, including the Wilse Richards-Bob Wilcox Ranch north of Killdeer.

In 1926, he began working at the Figure Four for Hans Christensen. He was able to establish a herd of his own; and Fred and Vic, Hans’ heirs, let him run his cattle with the Figure Four stock. Later, Bud became ranch foreman and directed al the daily ranching activities. He married Mabel Mathistad, and they had one son, George, also known as “Buddy”.

Perry served briefly in the U.S. Army during WWII. A shoulder injury precluded him from being shipped overseas.

By living frugally and avoiding Saturday night temptations in town, Perry had enough grubstake to purchase his own spread in 1950: the 4,000-acre Roscoe Hadden Ranch north of New Town in Mountrail County, dubbing it the YK Ranch. He practiced land management carefully and never allowed his cattle to overgraze the pastures.

Shortly after he purchased a new home for his 200 head of Hereford cattle, Perry married Emma Christenson, sister of Vic Christenson. In 1957, Emma passed away. He later married Edna Botner, formerly Edna Henderson. The ranch was sold to Al Strobeck in 1967. Perry and Edna then moved to New Town.

Perry belonged to the ND Stockmen’s Association, among many other organizations, and was a charter member of the fabled 50 Years in the Saddle. In fact, at age 76, he was honored for being the last surviving, active charter member of the group. Perry enjoyed playing his accordion and singing. He was known as a rag to riches cowboy.