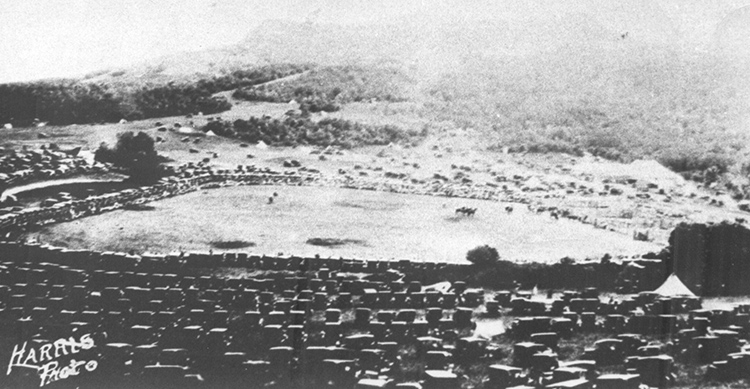 The Killdeer Mountain Round-up Rodeo began in 1923 and is North Dakota’s oldest professional sporting event. Originally, the rodeo was held in a natural arena in the Killdeer Mountains surrounded by cars. Families brought picnic lunches to the rodeo and later danced the night away.

The rodeo began as part of the Dunn County Fair and was the idea of trail driver turned rodeo producer Sam Rhoades. From 1941 until 1946, the Killdeer Mountain Rodeo Association ran the event. During World War II, a shortage of young cowboys forced the old timers to don their spurs and chaps to keep the tradition alive.
The rodeo became an RCA-sanctioned rodeo in 1949 and, in 1955, was moved to an arena in the city of Killdeer. Today, during rodeo week, Killdeer is a town that kicks up its heels and celebrates.

In 1998, the Killdeer Mountain Round-up Rodeo celebrated its 75th anniversary. Over the years, the nation’s finest cowboys have appeared in the rodeo’s arena. In 1984, World Champion Calf Roper Paul Tierney set a PRCA record in the arena with an amazing 6.9 seconds. It remains the fourth fastest calf roping time ever recorded at a PRCA rodeo.