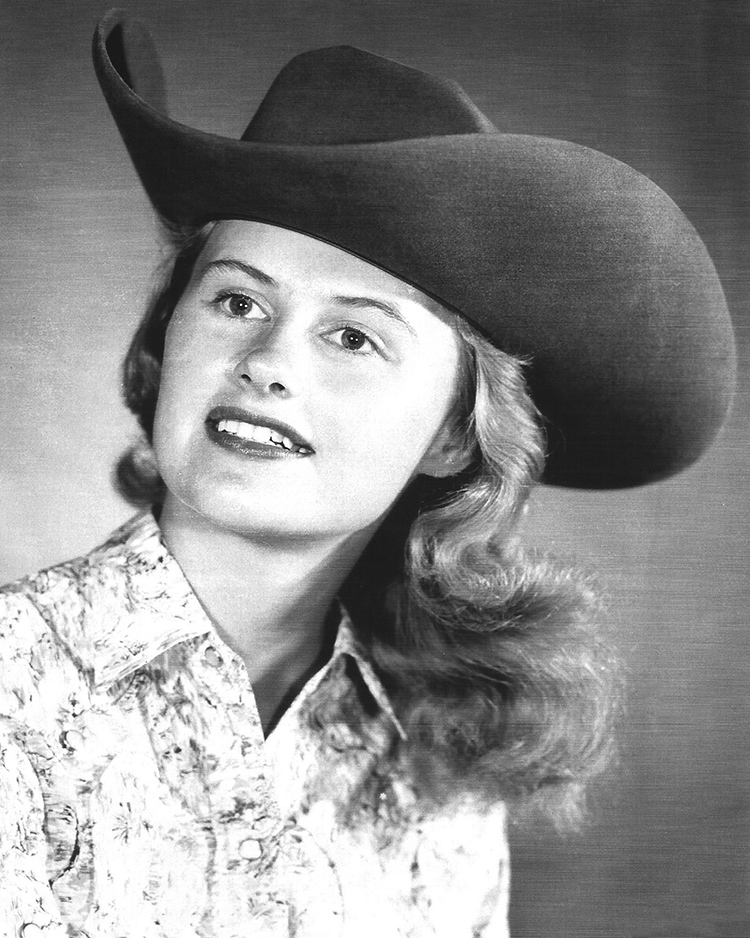 Born in Watford City, North Dakota, on July 12, 1937, Kaye (Van Dyke) Nelson is the daughter of Norwegian immigrants Arnold Stromme and Anna Signalness Stromme Van Dyke Jorgenson. Much of Kaye’s life was spent on her grandparent’s Bar U Ranch along the Little Missouri River north of Killdeer. Life lessons were learned sitting beside her grandfather during meals. Ranch business was discussed and, when a gleam hit his eyes, Kaye knew stories of area history and people known were soon to be told.

Kaye was Watford City’s 1954 Homecoming Queen, and was crowned the first Miss Watford City in 1955. In 1957, Kaye Van Dyke was crowned Miss Rodeo North Dakota 1957. She posted colors at all major rodeos, including the National Finals Rodeo.

While competing in the Miss Rodeo America Pageant in San Francisco, Kaye was introduced by Casey Tibbs to future World Champion rodeo cowboy Alvin Nelson. The two were married May 8, 1958 and to the union was born a son, Louis Alvin Nelson, in 1962. The couple ranched together in McKenzie County until Alvin’s passing in 2014.

Kaye holds a M. Ed. Degree from the University of North Dakota and taught elementary school. She is a long time member of the American National CattleWomen, the North Dakota CattleWomen and District One CattleWomen, past president of the local and state groups and has served on education and legislative committees, representing the ranching industry.

Kaye is a Professional Rodeo Cowboys Association Gold Card holder and served as a PRCA Secretary and Timer. She traveled all over the United States with Alvin when he rodeoed and is honored to be a member of HANDS, a rodeo wives sorority. Kaye served twelve years as Director of the Miss Rodeo North Dakota Pageant, and for the same period of time on the board of Miss Rodeo America.

Kaye Nelson is a long time President’s Club member of the North Dakota Cowboy Hall of Fame. Because of Kaye’s generous giving, the NDCHF was able to renovate its patio, now named The Alvin Nelson Memorial Arena.

Kaye resides on the ranch she and Alvin built together, with son Louis managing operation.