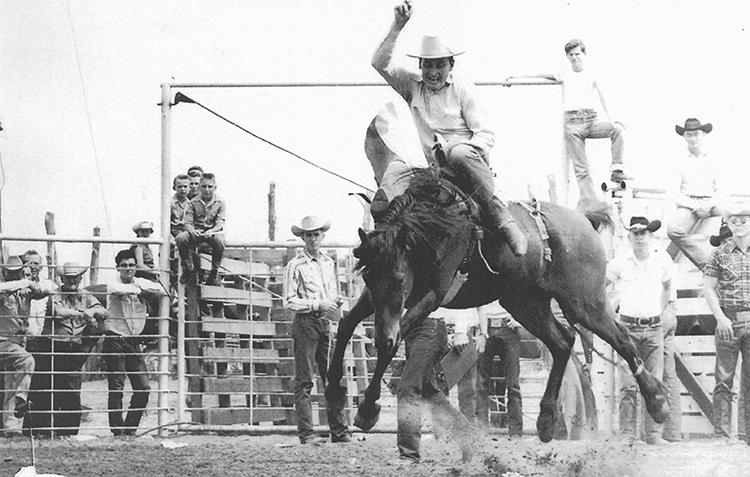 Fredericks also rodeoed throughout the U.S., appearing at Madison Square Garden in 1959 and at the Pendleton Roundup, Calgary Stampede, Cheyenne Frontier Days and Denver Stock Show during the 1950s and ‘60s.
​
At the 1956 National College Finals, Fredericks was steer wrestling champion and 3rd in bareback riding. In 1957, he was the runner up in saddle bronc. During his college career, he won at the University of Arizona, Hardin-Simmons and New Mexico A&M.
​
His RCA winnings in bareback, saddle bronc and steer wrestling came at rodeos in New Salem, Hazelton, Beulah and Killdeer, North Dakota, and at the State Line RCA rodeo and Plentywood, Montana. Fredericks finished 9th in the nation in NIRA saddle bronc standings in 1954 and 5th in saddle bronc in 1956.
​
However, his achievements go beyond the rodeo arena. Fredericks was a school teacher, Community Action Program director and consultant in Indian education, agriculture and economic development. He owned a ranch west of Twin Buttes where he raised cattle, horses and eight children.
​
Fredericks was involved in the National Indian Cattleman’s Association as president from 1974-‘79, American Indian Agricultural Credit Consortium as president and Board member in the 1970s and the American Quarter Horse Association. He also served on the National College Rodeo Board of Directors while participating in college rodeo.

It was said that Fredericks was “a cowboy’s cowboy, hanging with the best at both ends of the arena. He never bragged, but he always showed up.”