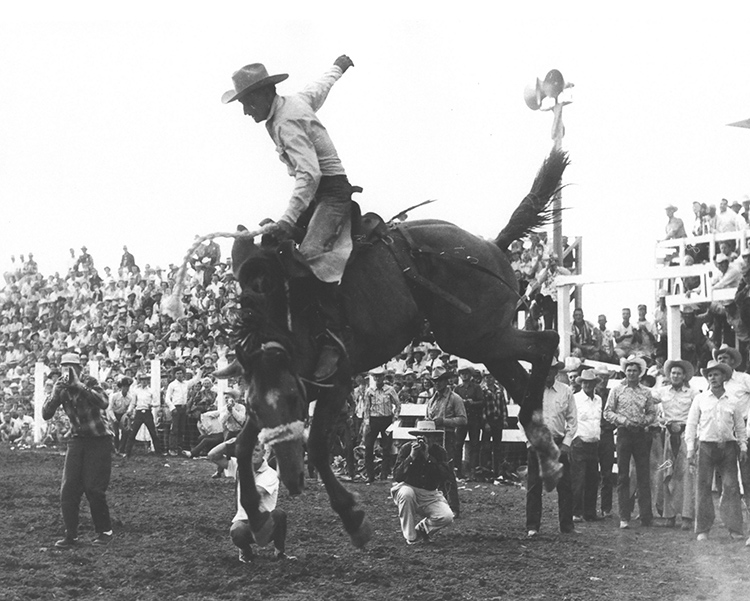 Joe Chase was born on February 19, 1933, to Joseph Sr. and Anna F. (Fredericks) Chase. He grew up and graduated from Elbowoods High School.
​
As a high school junior, Joe claimed his first rodeo title and buckle at the September 1949 North Dakota State Saddle Bronc Championship at the old Sanish rodeo grounds. The young Fort Berthold Indian cowboy would eventually prove he could ride with the best rodeo cowboys of the world.

Encouraged by his older brother, Emanuel, Joe was the first of the Fort Berthold cowboys to leave the reservation and go on to college. While enrolled at Hardin-Simmons University in Abilene, Texas, Joe became the first North Dakotan to win national college rodeo titles. He claimed the National Intercollegiate saddle bronc title in 1952 and 1953 and was selected runner up for all-around cowboy. Joe also participated in bull riding and bulldogging.

Intercollegiate competition exposed him to professional rodeo and after graduation from Oklahoma A&M Joe traveled with the North Dakota ‘Six Pack,’ qualifying on some of the toughest bucking horses of the era at rodeos throughout the U.S. and Canada.

Along with ranking among the Rodeo Cowboy’s Association’s top saddle bronc riders, Joe gained fame at the Dickinson Match of Champions where he and world champion Casey Tibbs finished close several times for first-place honors in 1955 and 1956. In 1957, he won the title himself. Joe earned the bull riding championship in Omaha in 1956 and the 1958 saddle bronc riding title at the Cow Palace in San Francisco. He went on to the National Finals Rodeo in 1960 and 1961 and qualified in the saddle bronc riding event.

After an injury forced his retirement in 1962, Joe took up trading bucking horses and maintains ranching interests in North Dakota. He and his wife Jill lived in Loveland, Colorado, where Joe worked in Indian economic development. They had two children. Joe died January 7, 2005, in Loveland.