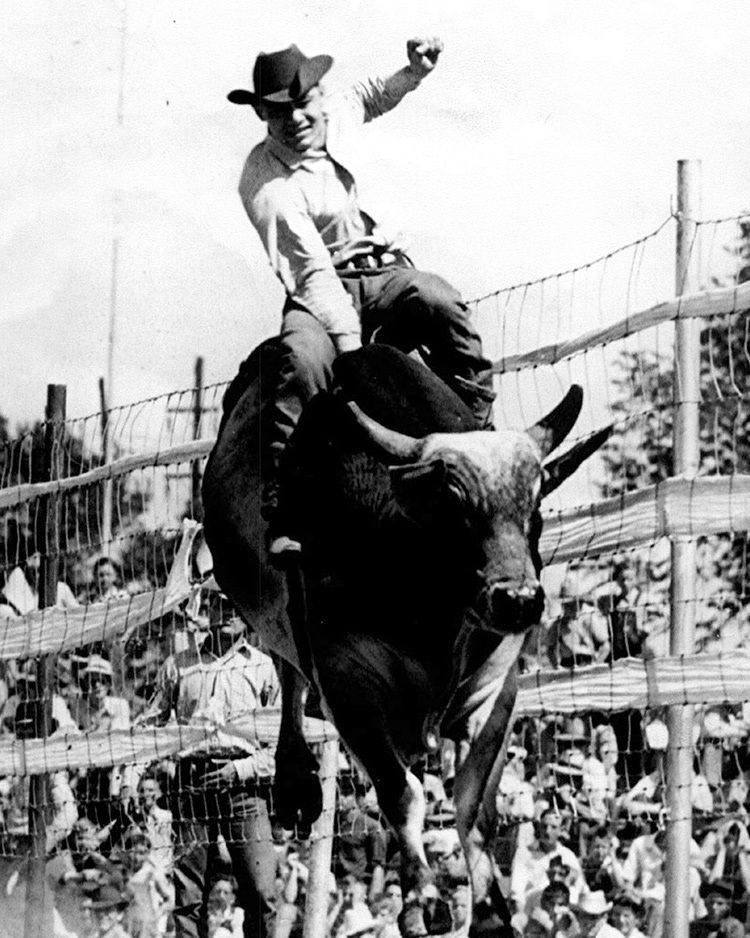 Lyndon Earl ‘Frank’ Marshall was born to Albert S. and Maude (McLain) Marshall on December 13, 1914, on the family farm/Hereford ranch near Forbes.

Lyndon soon received the nickname ‘Frank’ and got his first pony at about five years old. He taught the pony to climb steps, open latches and let himself into the kitchen, doing tricks while he stood on the saddle. Frank became a well-known horse breaker and trader. His rodeo interests were inspired by local rodeos. He graduated from Forbes High School in 1932 and farmed at home before working construction in Montana and Washington.

He soon joined the Cowboy’s Turtle Association (now the PRCA). In May 1942, Frank made a spectacular ride aboard the bull “Deer Face” at Fort Smith, Arkansas. His rodeo career ended as the #4 bull rider in the world and the 25th all-around cowboy.

Frank served in the U.S. Army from 1942-45, fighting in Tunisia, Sicily and Italy. Following his military discharge, he worked with Soil Conservation Service and resumed rodeoing. Unhappy with his performances, he attended the North Dakota Agricultural College, Fargo, earning a civil engineering degree in 1951.

He married Bonnabelle Winters and had two sons–Bill and Pat. Frank was involved in construction, settling in Trenton, New Jersey. Through the years, Frank maintained his Turtles/PRCA membership and supported Miss Rodeo America functions.