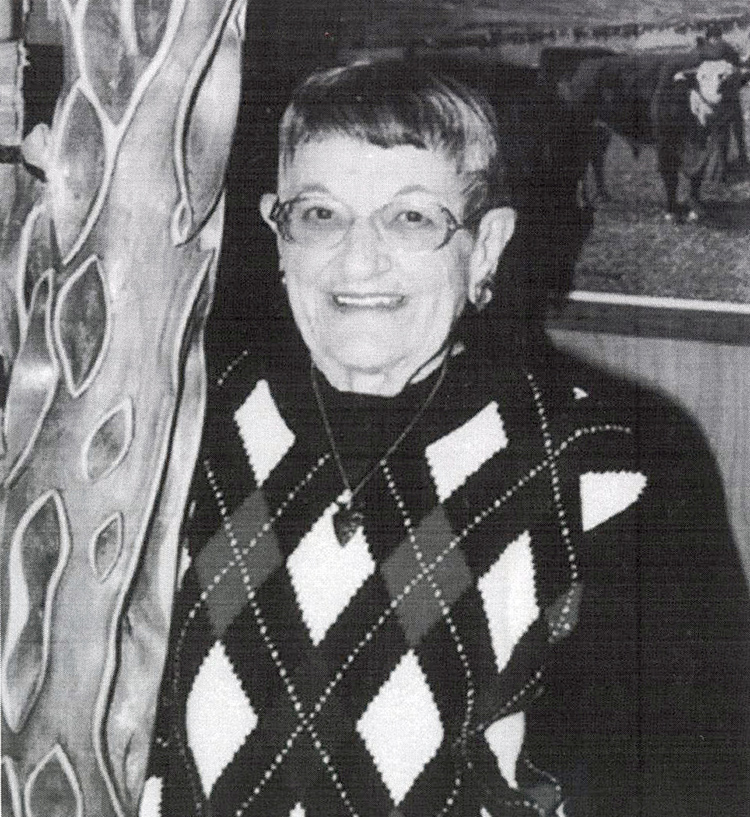 Born July 16, 1912, to Dan and Olive (Syverson) Connell, Evelyn grew up on a ranch 20 miles south of Medora and attended the Lebo School through the 8th grade. She liked to work outside, trading her inside chores for her sisters’ outside chores. Evelyn attended a year of high school in Missoula, Montana, and three years in Dickinson. She earned a teaching certificate from Dickinson State and taught at the Lebo School and the German School near Amidon.

While in high school, Evelyn attended a Wild West show in Medora where she met a young cowboy whose saddle-bronc horse jumped over the fence and landed on the hood of her dad’s new car. On Oct. 24, 1931, Evelyn married that cowboy-Walter Neuens. After they married, both Evelyn and Walt rodeoed. She entered in cutting and barrel racing.

A couple of years later, the couple moved a homestead shack into Walter’s parents’ backyard and lived on the Neuens Ranch, 17 miles north of Medora, for 4 years. They ranched and raised horses for the U.S. Army and in 1935 began buying and shipping horses for Steve Chase, an eastern horse dealer. The couple and their son, Billy, moved to Kent, Connecticut, where Walt managed a horse barn.

However, they missed the Badlands of North Dakota and came home in 1937. By then, Walt’s parents were living in Dickinson, and Walt and Evelyn moved into the ranch house. After repairing and rebuilding from the 1947 Little Missouri River flood, the family moved to Bismarck.

In 1956, Evelyn and Walt began operating a western store on Main Street in Mandan and, in 1961, they opened Neuens’ Western Shop in Bismarck. In the late 1960s and 1970s, the couple spent several summers running the Ferris Store in Medora and performing in the Ranch-o-rama.

Walt died in 1990. Evelyn remained active, sometimes helping at son Don’s tack and leather shop in Mandan or visiting her other three sons and their families around the country.

Evelyn was involved in many organizations over the years, including the Bismarck Horse Club, Bismarck Mounted Police, DeMores and Badlands Trail Riders, Westerners and DAR. Special to her heart, though, is the NDCHF, for which she served as founder and first president.