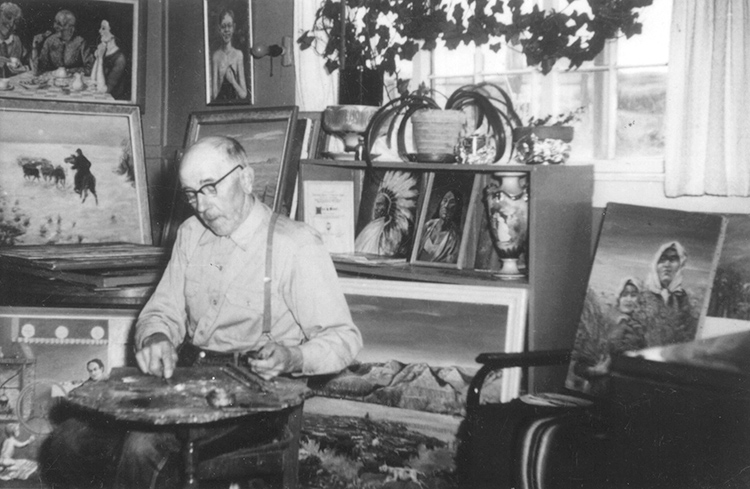 Einar Hanson Olstad was born March 7, 1878, at Lillehammer, Norway, a son of Hans and Ida (Kirkebø) Olstad. He was one year old when the family moved to Sioux Falls, Dakota Territory, where his father established a blacksmith shop.

Einar began painting when he was about 14 years old, selling scrap copper, lead and rags to buy his paints. His father died in 1899, leaving Einar to support the family. He continued his father’s blacksmith trade and burned his brushes to resist painting instead of designing and forging ornamental ironwork.

In 1919, Einar and his family moved to a ranch north of Marmarth. In 1929, he bought the Frank Riggs ranch on Garner Creek, between Medora and Sentinel Butte. In the 1930s, Einar returned to painting while he and his wife, Bessie, lived at Peaceful Valley Ranch near Medora.

Einar’s first public recognition came when he was employed as a blacksmith through the Works Progress Administration. In 1937, he was asked to cut out a wrought iron silhouette of a rearing horse and rider for the entrance piers at the South Unit of Theodore Roosevelt National Park.

Weldon W. Gratton, a National Park Service landscape architect, designed the piece to be attached to sandstone, but accepted Einar’s suggestion to pound it out in relief to make it more realistic. Later, Einar and other blacksmith helpers from the WPA made two horses for the North Unit entrance of TRNP.

In 1940, he studied mural painting at the Layton School of Art, Milwaukee. Two years later, he studied there again. These few months comprised his only formal training. Among Einar’s paintings are “Drought of ’36,” depicting a starving young calf beside its dead mother, and “To Greener Pastures,” later accepted by the National Exhibition of American Art in New York City.

Einar’s first major one-man art show opened in 1942 at the St. Charles Hotel, Dickinson, with many shows and honors to follow, such as an American Artists Professional League Citation Award, a showing of his work at the New York World’s Fair and being featured in the September 1951 National Geographic article “North Dakota Comes Into Its Own.”