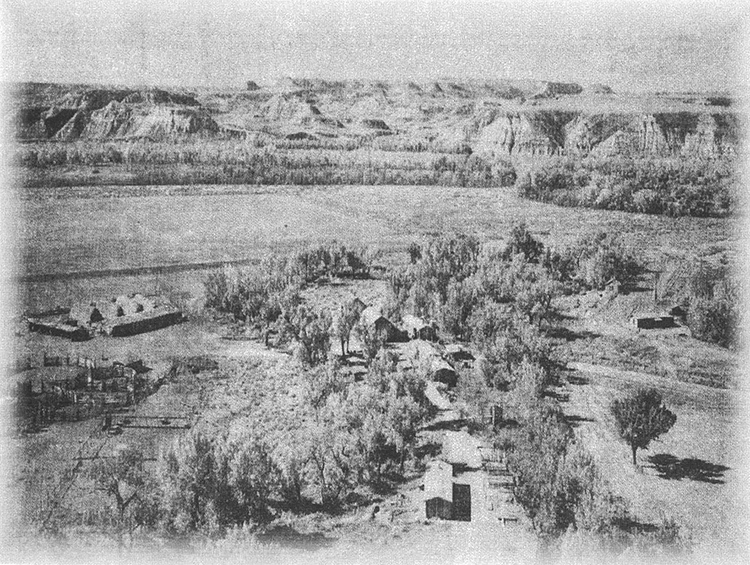 The Eaton Brothers Custer Trail ‘Dude’ Ranch began in 1868 when Howard Easton left Pittsburgh, Pennsylvania, to come west to live the kind of romantic life the western legends are made from. He ‘squatted’ on land in the Missouri breaks near Medora in 1879. His brother, Alden, joined him in 1881 and Willis, another brother, followed in 1882.

At first, they made their living furnishing wild game for the railway work gangs and putting up wild hay for the nearby army post while they built a herd of horses and cattle. Initially, the three brothers established separate ranches, but consolidated their operations in 1883.

About that time, some of the Eatons’ eastern friends decided a western vacation would be healthy for their children. One of them, Bert Rumsey of Buffalo, New York, insisted on paying for his extended stay.

Though the Eatons were reluctant to accept the money, they agreed; thus, the first “dude” ranch in the U.S. was born. They named their operation the Custer Trail Ranch because General Custer had once camped there.

Early on, the accommodations weren’t much, and guests slept several to a bed or on the floor, paying as little as $25.00 per month. What they were really paying for was the chance to participate in ranch life–riding in the clean, pure, open air; helping with the horses and cattle; and doing other ranch work.

The Eatons were naturally hospitable and were made for the business of helping other people have a good time. They would gather neighbors in from miles around for holiday meals and other events.
The winter of 1886-1887 wiped out 1,350 of the Eaton Brothers’ 1,500 head of cattle. That same year, the ranch home burned to the ground, and the Eatons lost everything. The only thing that saved the ranch financially was having ‘dudes’ staying there.

In 1904, the Eatons moved from Medora to the Big Horn Mountains near Sheridan, Wyoming, where they purchased a ranch that became one of the best known ‘dude’ ranches in the country.