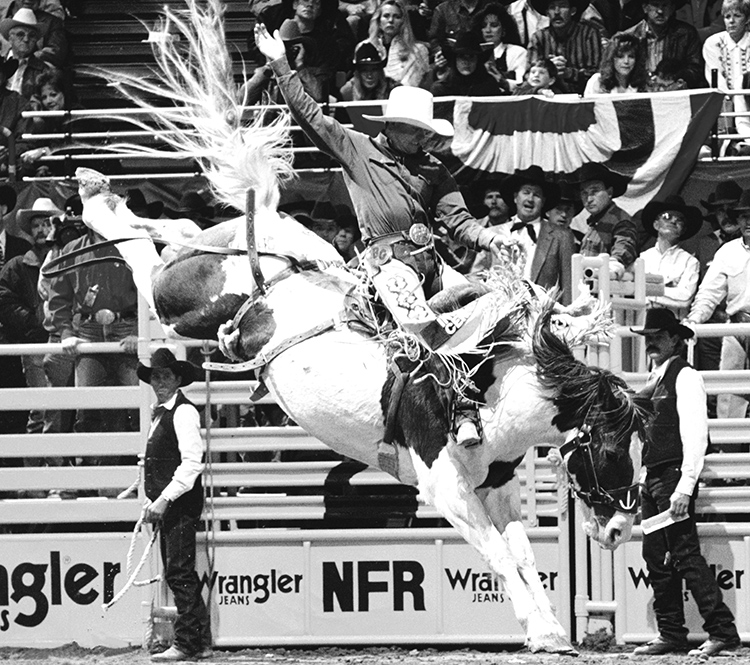 Born March 25, 1959, in Richardton to Stanley and Sharon Gjermundson, four-time World Champion Saddle Bronc Rider Brad Gjermundson’s achievements, accomplishments, criteria and biographical information are well known.
​
After joining the PRCA in 1980, he promptly earned the ‘Rookie of the Year’ award. Gjermundson qualified for his first National Finals in 1981 and repeated this feat consecutively through 1988. Gjermundson qualified again in 1994 where he entered in 13th place and earned $81,000 in 10 days, more than any other contestant that year.
​
Gjermundson began his rodeo career by winning the N.D. High School Rodeo Association saddle bronc championship in 1976 and 1977 and all around champion in 1977. He was the NDHSRA team roping champion in 1975 and competed in the National High School Rodeo Association Finals in 1975 1977.
​
He continued to compete on the Dickinson State College rodeo team from 1977 1980, winning the National Intercollegiate Rodeo Association Great Plains Region in 1978 1980 and 5th in the nation in 1978, 2nd in 1979 and the championship in 1980. He was named the NDRA “Rookie of the Year” in 1978, winning the NDRA saddle bronc championship in 1979.
​
Gjermundson competed and brought home prizes from all over the U.S., including Houston, Cheyenne, Calgary, Pendleton (Ore.) and many more. He earned the Badlands Circuit Finals saddle bronc championship six times between 1983 and 1995.
​
Gjermundson was invited to the Home On The Range Champions Ride 21 times from 1978-1998. He received the 35th Annual Champion’s Ride Walt Neuens Memorial buckle in 1991 and, since 2002, has served on HOTR Rodeo Committee.
​
He was inducted into the N.D. Sports Hall of Fame in 1994 and the Pro-Rodeo Hall of Fame in Colorado Springs, Colo., in 1995. He received the DSU Young Hawk Award in 1997 and was named to the DSU Alumni Fellow Program in 2008.
​
Gjermundson married Jackie Brown in June 1984. The couple ranches near Marshall and has three children.