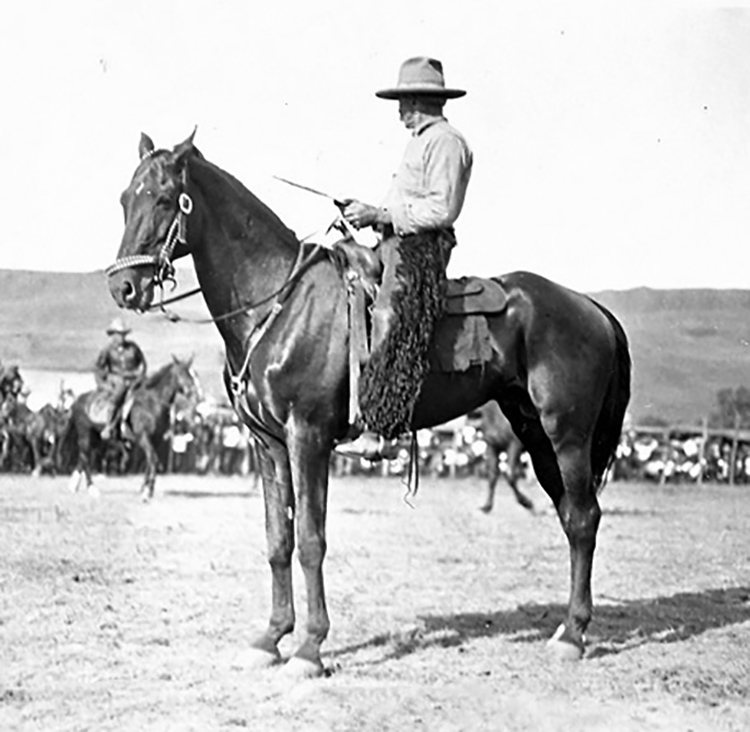 Ben Bird was born in Texas on December 7, 1864. He made his first drive north to Montana in 1884 and, in 1886, hired on for three separate cattle herds that were heading north from Texas.

In 1887, Ben brought cattle for the Lone X outfit to the mouth of the Little Missouri near Williston. His last drive was in 1892 with the Diamond C herd to the Killdeer Mountains of North Dakota, where he decided to plant his roots. He helped others find land, supplying them with horses or livestock. He later helped start Almont and eventually established his own ranch in Medora.

Ben stood 5’11”, slim and with very erect posture, squared shoulders and a lofty Stetson on his head. A hospitable man of remarkable vision and courage, he set an example of brave and earnest living. Noted as a great storyteller, he made history come alive for his friends. For years, he was a confidante of Theodore Roosevelt.

Often referred to as the ‘Dean of Cowboys,’ Ben was nominated for membership in the National Cowboy Hall of Fame and was a life member of the Range Riders Association of Montana, the Cody International Cowboy’s Association of Wyoming and the Old Trail Drivers of Texas.

In his later years, Ben followed the race track circuit, working at his son’s stable, which contained some of his horses, too. All of his life, he could boast of a fine horse under him.

In 1959, when Ben’s horses were racing at Turf Paradise in Phoenix, Arizona, a featured race was called the “Ben Bird Special.” He often said he wouldn’t have traded his experiences for anything else this world has to offer.