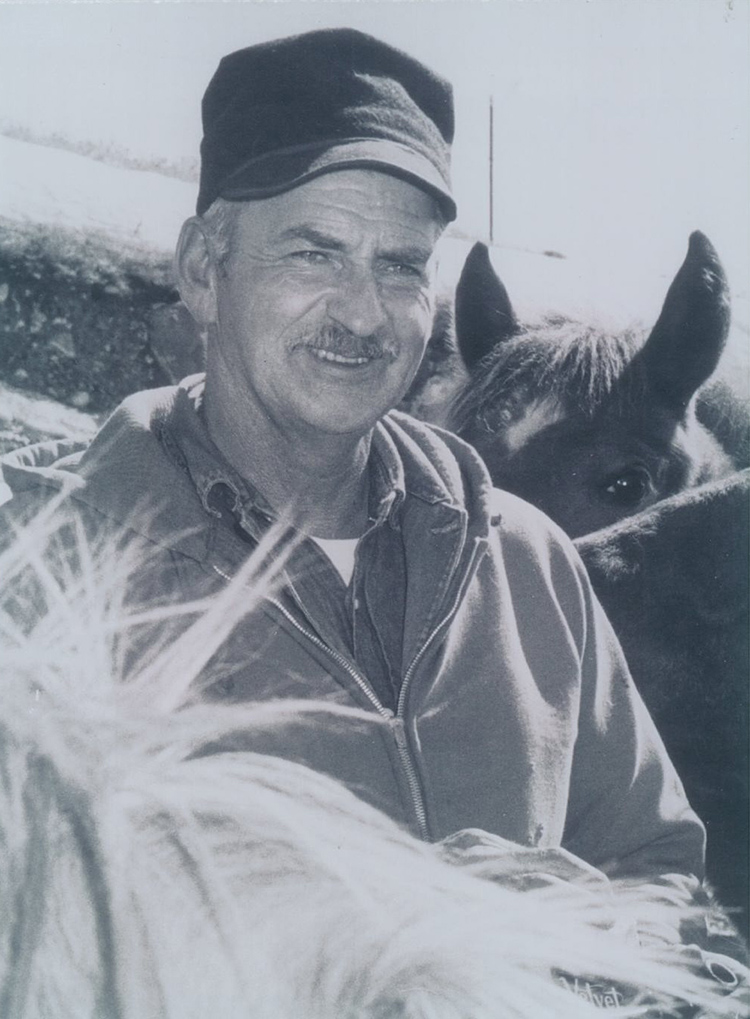 Moore was born in 1921 at Palermo, ND, to Albert and Emily (Peterson) (Halvorson) Moore. His parents came to the area in 1908 and built their ranch with the help of their six children. Moore was educated in country schools and at Palermo High School. Moore’s love for ranching began early in life. He herded cattle on his parents’ ranch in the summer and, in the fall, trailed cattle into Palermo stockyards to be shipped to St. Paul.

Moore was an avid reader and a Golden Gloves boxer. He broke horses for both riding and driving and was an accomplished teamster. He married Myrtle Lindahl in 1942, and they had five children.

In 1945, he started farming. That fall, he was wiped out by hail, losing everything. He then decided to try cattle, buying 25 Hereford heifers and one bull. This breeding stock was the beginning of his commercial cattle operation that continued for two decades. Moore was very active in the ranching industry in ND. He later introduced the Scotch Highland cattle to his operation.

The name of his ranch, Kyloe Ranch, referred to the Scotch Highlander breed. Moore promoted good horses and good horsemanship. In developing his mare program, he sought out Appaloosa stallions throughout the U.S. that had the bloodlines and quality to enhance not only his business, but also the horse business in ND.

His main interest was his Appaloosa breeding program, which started in 1959 with a leased stud and a handful of mares. He built it into a herd known industry-wide and sold horses across the U.S. and into Canada and Australia.

Moore was a pioneer in progressive ranching practices. He had the first pole barn in the area that was built on his ranch in 1956. He also had the first water dug-out dam in the area. In 1966, Moore sold his cow herd and contracted to produce pregnant mare urine for a Canadian pharmaceutical company. He increased his mare herd to 200 in the 1980s. The ranch became the largest register of Appaloosa horses in the U.S. He was an Appaloosa Club-approved judge. Moore’s son, Dallas, took over the Kyloe Ranch and continued breeding Appaloosas.

In 1956, local horse enthusiasts started the Blaisdell Rodeo Club. Moore donated the land for the arena site and was an active member until his death in 1983. He served on the NDRA Board for several years in the late 1960s. He was also involved in starting a 4-H horse program in the early 1970s. During the 1960s-70s, Moore was a founding member of the ND Appaloosa Club, showing extensively throughout the Midwest and Canada, winning many awards. He served as president and secretary of the club and also helped start the Mon-Dak Appaloosa Horse Club. To further promote horsemanship in his area, Moore joined other horse enthusiasts to form the Mountrailmens Horse Club. Later, he helped form the Northwest Horseshow Association.

From 1964-’65, Moore served as president of the Sioux National Appaloosa Club, covering areas of ND, SD, MT and WY. Moore served as township clerk for 30 years and was a member of the ND Stockmen’s Association and worked as a brand inspector for 30 years.

The Moores were active in the Mountrail County Foster Care Program and were foster parents . Andy was a Mountrail County Sheriff’s Special Deputy from the mid-1950s to the mid-1970s. Moore was considered a fair and kind man and a “true cowboy”. When judging, he held to high standards and was unbiased and not political. He was known for his honesty and integrity.