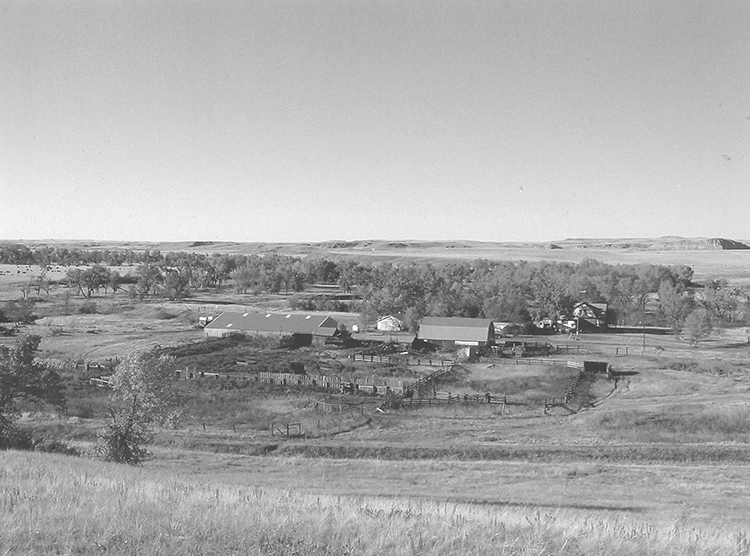 Anchor Ranch, west of the Cannonball River in Grant County near present day Shields, North Dakota, was established by William V. Wade, a notable person in Dakota Territory. In 1889, Wade trailed his herd of Hereford cattle and horses from Emmons County, across the Missouri River, in order to “squat” on free grazing land.

After Grant County was officially opened for homesteading, Wade gained legal title to the acreage. Later, the family operated the ‘Wade’ post office and small store on their property.Sitting Bull was a friend of Wade’s. When some young braves stole a few horses from Wade, Sitting Bull insisted they return the steeds to the Anchor Ranch. They did so promptly.

Wade died on the ranch in 1927. His daughter, Mamie Weedun, took over its operation until 1951. Mamie increased the acreage of the Anchor Ranch considerably by purchasing farm sites from homesteaders who were packing it up and heading west during the ‘Dirty 30s’.

Bad floods in 1950 discouraged her and she was ready to retire. John Voigt was looking for a new spread because the Corps of Engineers had forced eminent domain on his ranch near Elbowoods. The Voigts trailed their Herefords cross country to their new holdings.

Duaine Voigt took over operations for his father in 1961. Over the years, he raised Red Angus and Simmentals and cross bred them with Salers. He also raised registered Quarter horses. Voigt uses three brands: the Lazy V Hanging J, the Bar Diamond Bar and the X Lazy J.

He has retired and his daughter and her husband lease the ranching operation. Two thousand head of buffalo now roam the same 23 quarters of land that Wade first laid eyes on 120 years ago.